Secure your spot and get started today with our EXCLUSIVE offer!

By opting into the web form above you are providing consent for Impact Taekwondo to send you periodic text messages. Standard rates may apply. You can reply HELP at anytime or learn more. You may opt-out anytime by replying STOP.
ACCESS OUR SCHEDULE
& EXCLUSIVE WEB SPECIAL

Secure your spot and get started today with our EXCLUSIVE offer!

By opting into the web form above you are providing consent for Impact Taekwondo to send you periodic text messages. Standard rates may apply. You can reply HELP at anytime or learn more. You may opt-out anytime by replying STOP.

This is a great place, not just for kids, but adults as well. My son and his Aunt (my Sister), are both part of the Black Belt Club and on the Leadership Team. I highly recommend you check it out!

My son and I have been attending the classes for 6 weeks now. I am so glad that I made the right decision and I decided to walk in and check it out.

The instructors here are passionate teachers and proud leaders. They have a lot of a patience for my 6 yr old. I really enjoy seeing my son get so excited after each class and he shows me what he learned and then he talks to the instructors !!

Nothing great ever happens if you do not try !! As for my son and I, we did and now we have a goal and are going for it with everything we have got !!

Please come and try out a class and see for yourself, as there is no better review then actually trying it on your own !! I am so glad I did!

Instructors here are caring and intentional. This is a really fantastic family-owned facility! Both of our kids love going and learning and have improved immensely in several areas of home, school, and life in general.

My 6 year old daughter loves Tae Kwon Do at Impact Taekwondo in Highlands Ranch! She has been there for about 6 months and this is the first activity she has ever truly loved. Everyday she asks if she can go to practice. The staff is wonderful and truly teaches to each child's ability level. I love that they are teaching my child to be confident, disciplined, and polite.

My daughter has been with Impact Taekwondo's school for years. It's a great organization on so many levels. I love that they incorporate some self defense techniques that stem from other arts and they work so hard to address the difficult topics affecting our kids today. There's a focus on self esteem and how to handle bullying as well as other situations that we all wish we could protect our children, but it's part of life. Having the tools to handle yourself and maintain control in difficult situation is the basis for many Marital Arts and Han Lee emphasizes self respect as well as respect for others.

Just wanted give a big shout out and thank you to this awesome facility! Our last martial arts experience was not the best and you guys have made this new experience a great one for Eli! Thank you so much!

My son has been at this studio for 4 years, and I can't say enough about how great it has been. Miss Michelle and Mr. Jim are phenomenal owners, caring for and guiding each individual student. The instructors are all awesome.My son's coordination, strength and confidence are greatly attributed to this program. A+ !!!

My family absolutely loves this program! My husband, my son and my daughter started this journey a little over 2 years ago! (They range in age from 10 to 50!)They all want to be Black belts together. They go to class together and they belt test together! It’s hard work and teaches discipline in the gym as well as life lessons used anywhere. It’s a family place. I can’t say enough good things about! So glad we stopped by one day! Best decision we ever made!!!

Breaking The Bat! Achieving your Goals! 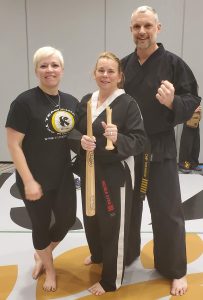 This Challenge was 2 years in the making.  At my first ProMac conference here in Denver – 2 friends broke bats at the training session.  I couldn’t attend that night, but thought it was so cool that they were able to do that.  Watching the video – they exhilarated from breaking their own bats.

Then next year, when the conference came around, I hesitated to sign up.  I was taking my instructor test and was focused on that.  I watched the videos of the others who broke their bats and again, thought it was something I would like to be able to do.

This year, I was going through the agenda and there it was again.  I hesitated, but as Jim and I were talking about the courses, he said “why not?”.  I couldn’t give an answer as to why not, so, I signed up.  I was nervous. I didn’t plan to tell anyone until after I broke the bat!  However, Jim decided to tell the entire school for me.  As we talked about the breaking seminar, Jim announced to the student body, that I would be breaking a bat.

My Instructor and Coach, Master Chip Townsend is a world champion board breaker.  He holds 14 breaking titles.  I took his breaking seminar at Master Scott’s school.  He was very inspiring, and I felt like I could break anything that he put in front of me – and I did!  After the seminar, I had a chance to talk to him and let him check out my technique.  His words were, you are going to have to hit harder!

I came back to the school the next day and practiced technique – I thought I had the power!  It was there, but would it be enough?  I was losing confidence.  I needed to do this for myself and my students.  I teach that we never give up – no matter how nervous or scared we are.  I needed to prove to myself, that I could do it.

We met on Friday to practice.  Again, he told me “more power”.  I was trying hard to get the power and lost my technique.  I wasn’t chambering.  I took a deep breath and hit the pad with technique and power – I had it.  It was up to him whether we could move forward.  He didn’t tell me no, so, I was still on.  We met again Saturday for more practice.  There were five of us girls breaking bats.  We met again, and Master Townsend determined I had the heart and determination to proceed.

Still, I was nervous, I had doubts – hearing you need to have more power over and over, made me wonder if I had it in me.  I received messages from students wishing me luck – I knew I couldn’t let them down.

We came in Sunday morning; we would be breaking at 8 am.  Myself and 4 other ladies – they were all younger than I am by at least 15 years or more.  We warmed up and he gave us our lineup.  I would be 2nd.   I was grateful I wasn’t first!  We hit the pad and again, I heard more power!!  I was going to do this.

It was time!  We had an audience, warmed up and got ready to break.  I was excited, nervous, scared.  Allison was first – she went up, hit the pad and nailed the bat.  It was my turn.  I went up, hit the target and then the bat.  I went through it without any problem.  I was excited and confident!  I was so pumped that I went through on the first time!

I teach my students that they can do anything they put their minds to.  It is always okay to be nervous and scared.  It’s when we overcome the nervous and scared and find the power within, that we become better – better students, teachers, and people.  We find the confidence to do what we need to do.

Now, a challenge – find something that you are nervous about trying – and go out and do it!  Remember to find the strength and you can do whatever you put your mind to.

Michele Evins the Co-Owner and Lead Instructor for Impact Taekwondo. A Third Degree Black Belt, She works everyday to make sure that Impacts Curriculum and how we teach are up to her tough standards and high expectations. Michele can be reached at [email protected]